The headline is obviously a big lie, because I followed this twitter conversation last year, but it’s still interesting to me and I wanted to write it somewhere down.

Starting point was that Bruce Dawson (Google programmer) noticed, that building Chrome on Windows is slow for various reasons:

Based on some twitter discussion about source-file length and build times two months ago I wrote a blog post. It's got real data based on Chromium's build, and includes animations of build-time improvements:https://t.co/lsLH8BNe48

Trentent Tye told him to disable the “filter driver”:

disabling the filter driver makes it dead dead dead. Might be worth testing with the number and sizes of files you are dealing with. Even half a millisecond of processing time adds up when it runs against millions and millions of files.

If you have never heard of a “filter driver” (like me :)), you might want to take a look here.

To see the loaded filter driver on your machine try out this: Run fltmc (fltmc.exe) as admin. 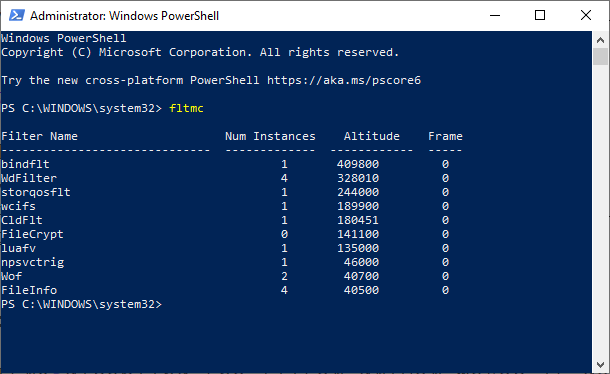 Each filter in the list sit in a pipe through which all IO requests bubble down and up. They see all IO requests, but ignore most. Ever wondered how Windows offers encrypted files, OneDrive/GDrive/DB file sync, storage quotas, system file protection, and, yes, anti-malware? ;)

This makes more or less sense to me. I’m not really sure what to do with that information, but it’s cool (nerd cool, but anyway :)).