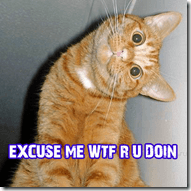 This is a very old subject. But thanks to a way to motivated workmate, who used to drop “regions” in every code, we talked about this subject again. Are #regions good or not?

For all of you who don´t know what the hell Im talking about: #region on MSDN.

Let´s take a look on an example:

“…“ stands for countless other stuff.

Im interested in the Code not in any kind of blocks. With the use of #region the only thing you do is to shroud the code. When I open the user.cs I want to see the code on the first sight.

Yes, there is a hot key to make the code visual but why should I use this #region blocks?

Often I find some #regions in classes where the code consists of endless lines to give it a little bit more structure.

For example you open a method and find this:

I have the problem that I even so want to see the code. So I click to open it. 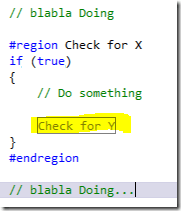 Fascinating…. but wait… what happens on Y? 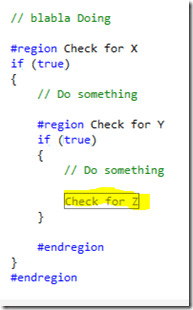 Every good thing is three…. What´s written behind Z? 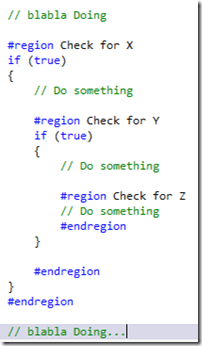 Fantastic isn´t it? Of course the code in my example is nonsense but in fact there could be kilometres of code behind X,Y and Z.

Why I think #regions is useless sense of order:

First fact: there is not a really advantage. Okay it looks nice on the first sight but in the end there is one possible conclusion:

There are too many responsibilities in this class and somebody try to hush this up. Better: Split it! And with this I didn´t mean into “Partial Classes” but into separate function units.

Another example: Visual Studio always put interface implementations in #regions. I don´t think that´s nice (and its possible to stop it ;) ). Is it really helpful for structure? In my opinion there are way better opportunities since VS2010. So I don´t need any #regions.

If you are creating “On-the-fly” codes (e.g. with the TDD Manier), Visual studio used to place the code somewhere as well. That proofs that the system of #regions is to be doomed to failure anyway.